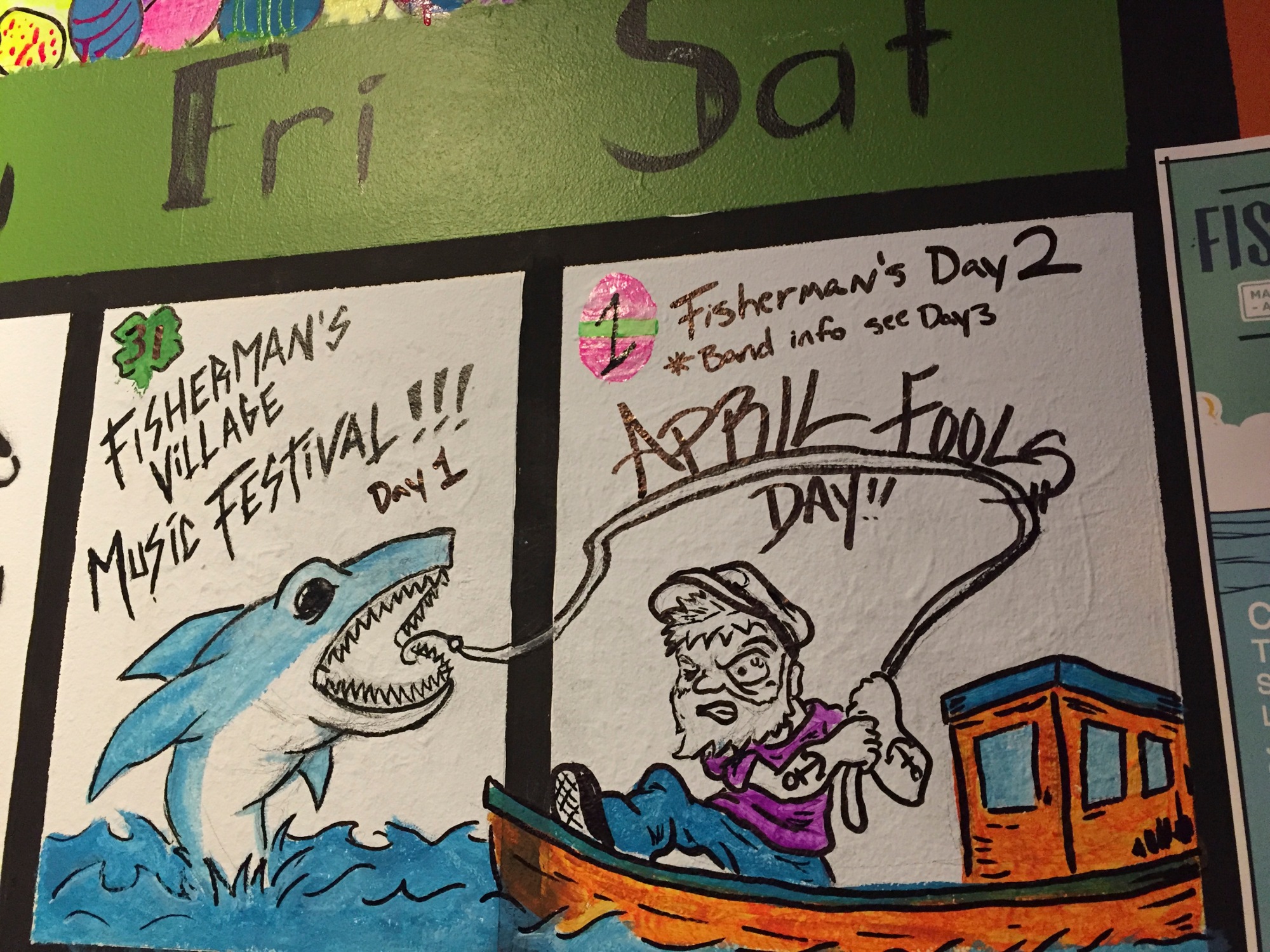 Wow. It’s super cool to see lots of people out supporting musicians and art. Ryan Crowther, of Everett Music Initiative, is a gift to this community and I’m proud to know him. Thanks for bringing a glorious new vision of Everett to Everett, Ryan.

I bought my tickets early at the $25 for the weekend price. We missed the action Friday due to being sick all week (O) and me being gainfully unemployed, but contracting, seeking work, and just tired (me), and went out to dinner instead.

Saturday, we began the journey with a yummy dinner at J Ramen and Sushi, and then saw the following bands:

Ghost was very good, and I wish I heard more of their set.

Tilson XOXO was totally surprising and fun. I had noticed the lead singer cruising around The Anchor wearing a knit cap and a letterman’s-like jacket. He must have been warm! When he got up to sing, the crowd got engaged and rocked and rapped with him.

The Seshen, taking the full stage at the Everett Performing Arts Center with a simple setup, was beyond magical once they started to play. With just a vocalist, a dude on bass, and a drum set, and I’m guessing one helluva of a computer sound generating system manipulating by foot (think Ed Sheeran), they filled that space and were enthralling. O bought their album the next day. We grooved to it on Sunday before heading out for more.

Cave Singers were an old fave. They are humble and clever. And, seemed surprised that the set went okay. Something must be going on in the background. We enjoyed their set and headed home.

Sunday I did the church thing, the Irishmen pub grub for brunch with my friend, Kimberly, and then I wanted to see The Winterlings, who I had seen last summer at Fresh Paint. I connected with my metal lovin’ friends, Gretchen and Jim, and ended up catching Alex Johnston’s set because of The Anchor starting late. I suppose that happens when you head home for the night at 5:30am!

Alex played solo on the keyboard lovely. He also played a raucous guitar, which was not my style, but good for him. Apparently, he’s a local Trinity grad.

The Winterlings are pleasant people and their set was calm and cool. I love hearing banjo and her sweet voice, and he plays guitar along with all kinds of gadgets with his feet. Let’s just say that I remain in awe of the joyful noises that one and / or just two people can make on stage!

We jetted off to see Kevin Murphy, who I first saw perform at the 100 Years Ago Tomorrow show. Kevin had written and sung a song about my cousins’ great-grandfather, Jefferson Beard, who was killed during the Everett Massacre. He sung it so sensitively, I wanted to hear him sing again. This time he had a bass player and drummer with him. It’s simple music with some emotional bursts. I, fortunately, had a chance to catch up with him later that evening outside when I was seeing what food options were still open on Sunday night on Hewitt. He was glad I came up to him again and that I had introduced myself back in November. The massacre is a local story that still has impacts today. And, as he realized writing the song, this person’s ancestors could be in the audience. They were. Kudos to him for acknowledging that.

We then went back to the Anchor for Woodshed, who I would describe as sounding like Metallica with a farm boy doing the singing and a combination Chris Cornell / Frank Zappa bass player, slamming on his bass while grooving all over that stage. They were super fun to watch. And, my metal friends were happy.

Gunpowder Stitches. I’m not sure I understand the name, but they do have a song called Gunpowder Stitches, were a little less metal and little more rock. A pretty standard band, we liked them, but were more excited about …..

The SkyeMonkey! I met these two, Tim and Joel, at Basecamp, which was Ryan’s office and mine for a while in 2016. They, too, had a rock feel. Now, they have this wild goth presence, cool screaming-like vocals, hooded drummer rocking out, and super cool vibe. Apparently, they just completely re-did their sound in the last month and half and this was the result. The audience was WAY into them, and they were super happy to get the feedback. Plus, Tim works for Kennelly Keys and they were a sponsor for the FVMF. Very cool. He also remembered by Everett Sunsets metal prints at Basecamp.

“Why weren’t you at the Everett Maker’s Market yesterday?” – said Tim.

“You sound just like an artist. Beating yourself up.” – said Tim.

And, I sighed. It’s funny because I know I make something. I think that somehow I justify the making part to the lab I use and therefore it’s not me. I’ll get over it. I will. Right??

Carrying on with the music, I took off and went to Tony V’s for the rest of the night. I had read about Planes on Paper sounding like Simon and Garfunkel and I had to hear that for myself. They do have a lovely complementary sound. Their last song was haunting about hoping that love will last or be enough. I’d like to hear them again.

I found myself often wondering HOW this people met in the first place. In my youth I had a friend whose voice and mine together sounded magical. We sang something as simple as Twinkle Twinkle Little Star and it just worked. The “two sides of” belief. Either everything means something or it doesn’t. I tend to fall on the “everything means something” side. We meet people for reasons and who knows the impact that they could have. Some for a day. Some for a year. And, some for a recording contract! 😉

Lake, the next band, was out of Olympia, and as I was eating my hamburger and tots, I wrote down these thoughts.

We all try to be heard.

Because we need to?

And, then came Courtney Marie Andrews. Ryan walked past me before she started to sing and said, “This is going to hurt.” Damn. That young woman can sing….and play….and communicate emotion. I found myself looking her up on the web and discovered that she was raised in Arizona, and was born after I graduated from high school. Wow. Stunning vocals and thoughtful, written by her, lyrics. I bought her CD, Honest Life, and had her sign it. I hope she keeps it up. What a treat. She was not to be missed.

I saw the first half of Karl Blau’s show and I described him, with the help of my table mates, as the country Jack Johnson. Smooth and sultry, I liked it, but it was time to go home.

This year’s festival was earlier than the previous years and I’m glad for that. It had less competition and the weather cooperated! I second Downtown Dave Ramstad’s suggestion of a fall festival as well. I think that Everett needs it and would support it. (Do it, Ryan! We’ll support you!)

As for the photos, I took them all with my iPhone. I saw so many photographers about and was glad that the event was being documented so well. I did my best to capture the sunsets, and found it enjoyable to be amongst the many posts on Instagram. 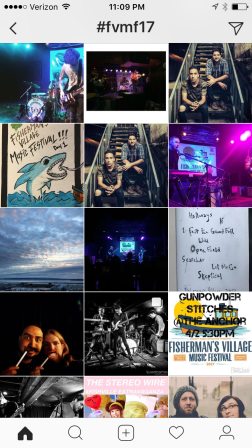 I have done and do event photography so keep me in mind for your future events. My aim is to make people feel like they were there too. This upcoming weekend (April 8, 2017), I’ll be photographing the Pioneer Square Spring Clean. Come on down and make Seattle pretty!

Thanks for the music, Everett.