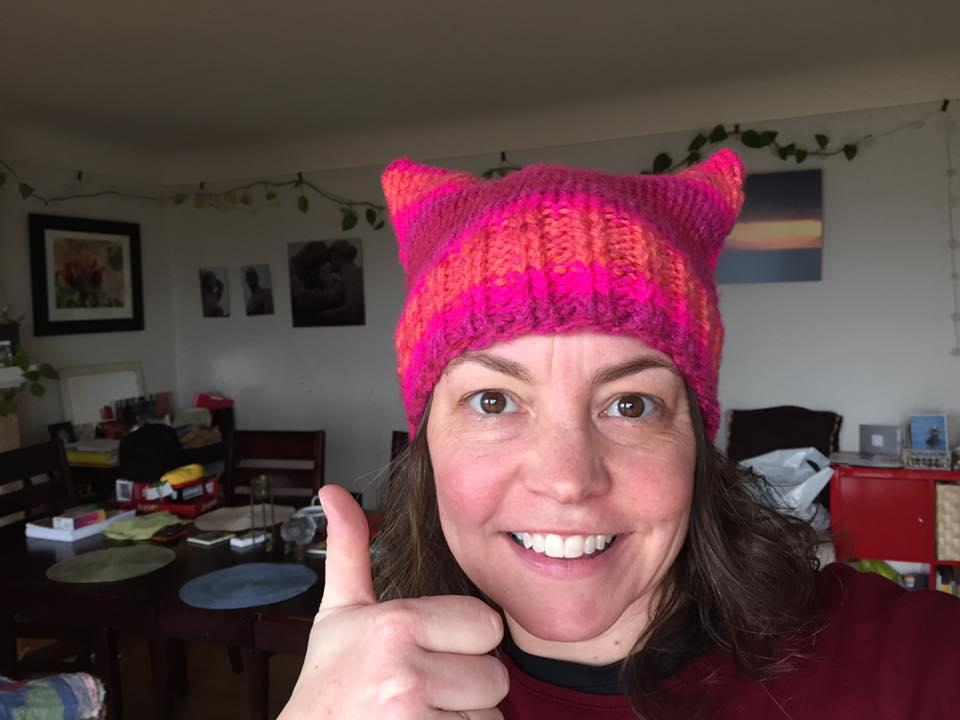 Early in December 2016 I decided that I wanted to go to Washington D.C. to walk in the Women’s March. I think that after Trump won, like most, I was stunned, sad, and speechless. Within a couple days, I became angry and wanted to do something. As much as I wanted to disown the red states and live in the utopian world of “Cascadia” (Washington, Oregon, British Columbia and northern California), I knew that my conscience would not allow me to abandon my rights and responsibilities as a citizen of the United States to stand up for others and to be a voice for the unheard. I could not allow the country, and potentially the world, to be worked over and potentially destroyed by the actions of President-elect Trump.

I must say that it’s still hard to use the word President and Trump in the same breath. It’s unreal.

So, with the loss by the first really qualified and talented woman presidential nominee, Hillary Clinton, I felt that she had passed the torch to us through her first public speech after losing the election on November 16, 2016.

“We have work to do, and for the sake of our children and our families and our country, I ask you to stay engaged, stay engaged on every level,” Clinton said. “We need you. America needs you, your energy, your ambition, your talent. That is how we get through this.”

In 1995, I traveled to Europe to complete a trip begun the previous year cut short by my mother’s death. I was able in March of 1995 to participate in an NGO (Non-Governmental Organization) forum being held in Copenhagen, Denmark. It was my first time really being exposed to so many cultures and stories of women from outside of the United States, their struggles for equality and fair treatment, and worst of all, violence against them. I learned that it was my responsibility as an American woman to stand up for women around the world.

I recall Hillary’s speech later that year where she addressed this crucial point.

In 2008, while the world was swept up with Obama, I caucused for Hillary with a few women from the RavennaLeaf neighborhood of Seattle. I changed my vote at the general election to Barack Obama, after he won the primary, because I believe in the ideals of the Democratic party.

In 2016, I caucused for Bernie Sanders after being undecided walking in the door. When it came down to it, I voted with my conscience for a progressive society that is truly equal, cares for its neighbors, where wealth is more evenly distributed, and we all have the opportunity for the pursuit of happiness. It’s about moving forward, not backward.

For a nation that has so much, so many are (literally) left out in the cold.

As Trump continued to criticize and bully his opponents in the Republican party, I was astounded that he grew in popularity. In October, while up in Anchorage, Alaska for a tourism conference, I had dinner with two Canadian friends of mine. They asked in all seriousness if I thought that Trump could win. I said that I honestly didn’t know. It wasn’t because I was going to vote for him, but because I truly didn’t know the heart of this nation, and couldn’t say for sure what might happen.

I’ve exchanged text messages with my Canadian friend since, and we are both still surprised at the outcome.

So, rather than sit at home and do nothing, I jumped at the chance to be a part of something greater than myself. And, as I go back in my Facebook feed, it’s the denial of the Lincoln Memorial for the march that triggered me. I came to understand quickly that the National Park Service was only doing its job in the context of a normal inauguration, but it sure seemed motivated by gender to me.

http://time.com/4595399/women-march-washington-barred-lincoln-memorial/
Wow. Talk about fear of women. It’s astounding to me how this country obstructs women’s rights on ALL fronts. A qualified women ran for President, who achieved the highest number of votes, and yet, she was not elected. We have multiple members of the incoming administration who have been accused of sexually assaulting women. Women’s right to choose is potentially back on the chopping block. Women can’t utilize their rights to FREE SPEECH on the National Mall. That’s fear, people. Trump and his rich, destabilizing, environment hating, racist, human hating, cronies can all go fuck themselves. I, as a woman, have had it with this general accepting that “it’s okay.” “Get over it.” Nope. Screw anyone else that believes it’s okay to take away rights from me or any other marginalized group that somehow takes power from those who seem to own the system. Oh, it’s rigged. Money is the god. And, if you don’t have it, we’ll too bad. What a nightmare! Sorry that they’ll be no world for your grandchildren. The rich people decided it didn’t matter. Sorry no fresh water to drink. The rich people decided that oil is more important. Sorry no freedom of speech. Trump decided his narcissistic party is more important. It’s on.

A recruiter friend of mine had extra hotel rooms. I bought air tickets. I was going.

The following day, I again waxed poetic on my reasons for not liking Trump and refusing to accept him as my president.

For 400 ish years we have tried to make a nation for “us.” We have stomped on “them” at many points. And, to what end? I revel in the idea of what “America” could be. Instead, we just in fight. When will we ever get to the point when we see the value in each and every life. “Troubles” get passed from each generation to the next. It’s why we see so many siblings so different from another. Traits, good and bad, get passed down. Open your eyes. We all have a right to be here. Wherever “here” is. Let’s act and try to care about this fact.

I don’t claim to be an expert. I’ve had my share of screw ups. But, for God’s sake, I do try to care for my fellow neighbors, and I try to stand up to bullies. I see our nation heading into an administration that will not and cannot represent us all. It’s sorrowful. To me, the issue is character. It’s not party or race, or gender, or issues, and I respect those who hold such strong virtues. I am personally not trying to take those away. I ultimately have an issue with our president- elect’s character. I think he’s a jerk, plainly said, and, I hope to be proven wrong. However……..

As I read through the Republican platform today, I realized that a few of their beliefs stick out to me and I cannot in good conscience support them.

I believe that love can be between men and women, women and women, and men and men. I am glad that we have given the right to marry to the LGBTQ community. I question how others believe that this really hurts us as a people. I want more love, not less.

I also support clean energy. I want to bring solar power to each and every house and business in the nation. The dependence on oil has simply made few rich and has damaged our environment from Alaska to Florida. I recommend reading Terry Tempest Williams’ book The Hour of Land for her reflections on how we are damaging our world and the creatures in it.

And, as much as I wish that no woman ever has to abort a fetus, I believe in her right to make that difficult choice regarding her body and her reproductive rights. I would prefer that it never come to that. I support birth control, wholeheartedly. I also stand by women who support life. I just don’t think that it’s fair to pass that judgement onto another person. We each get to make that choice for ourselves.

So, as I reflect on why I’m marching, I want to bring my voice to D.C. for myself and my beliefs, and for those who cannot be there.

We, now, as women and citizens of the United States, need to stand up for our rights in solidarity.

I want to walk and remember those who have gone before me who stood up for my rights to be whatever I wanted to be. And, at this point, we’ve yet to see as a nation a woman holding the highest office in the land. I want to see that sooner rather than later. I thought that 2016 was the year. Alas, no. But worse than Hillary losing, it was who she lost to that makes all the difference. Donald Trump is a man who degrades, and who unrepentantly, has admitted to sexual assaulting women.

And sadly, his treatment of women is just the tip of the iceberg. I don’t believe that he has respect for any “other” out there. He just loves himself. It’s offensive to me. And, it should be offensive and downright scary to anyone else who believes in what the United States of America was built upon.

“We hold these truths to be self-evident: that all men are created equal; that they are endowed by their Creator with certain unalienable rights; that among these are life, liberty, and the pursuit of happiness.”

I believe in the America that Barack Obama so eloquently speaks of and that the founder fathers intended. America is about WE THE PEOPLE. Not just some. Not just the chosen ones. Not just those who make a lot of money. Not just those with the “right” color of skin. It’s WE the people.

“America needs every one of us to lend our energy, our talents, our ambition to making our nation better and stronger. I believe that with all my heart. That’s why ‘Stronger Together’ is not just a lesson from our history. It’s not just a slogan for our campaign. It’s a guiding principle for the country we’ve always been and the future we’re going to build… A country where all our children can dream, and those dreams are within reach. Where families are strong, communities are safe, and yes, love trumps hate. That’s the country we’re fighting for. That’s the future we’re working toward….”

We are greater than the sum of our individual parts.

We won’t go down without a fight.

We come in solidarity to be heard.

“Our lives begin to end the day we become silent about things that matter.”

Resources for attending the Women’s March:

Speakers at the March —
http://nymag.com/thecut/2017/01/here-are-all-the-speakers-at-the-womens-march-on-washington.html 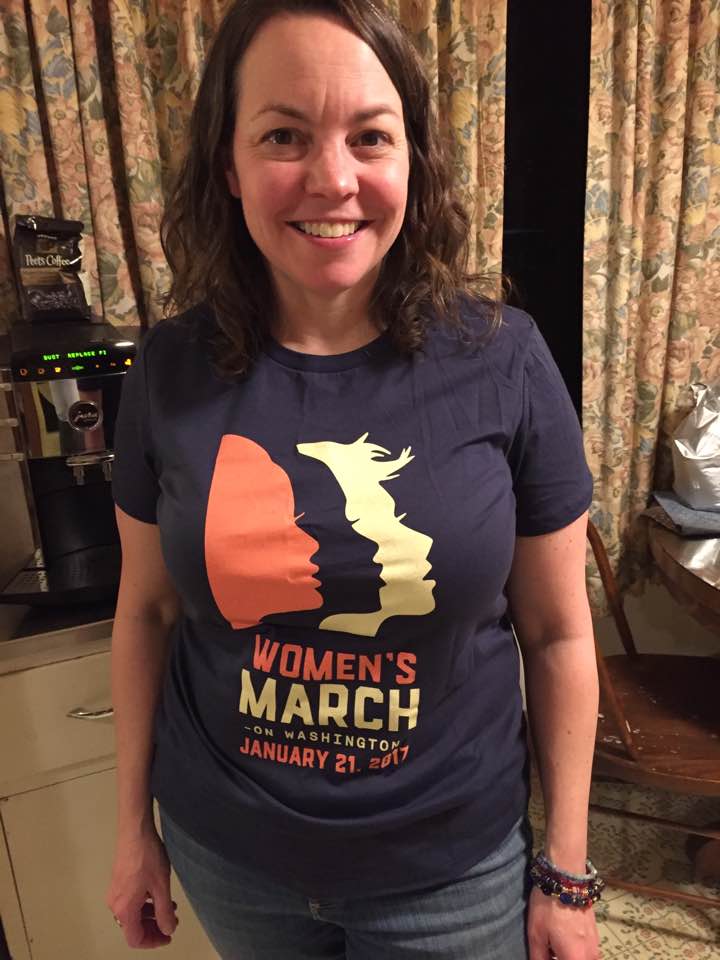 P.S. Thanks to Gretchen Cross for the Pussyhat! 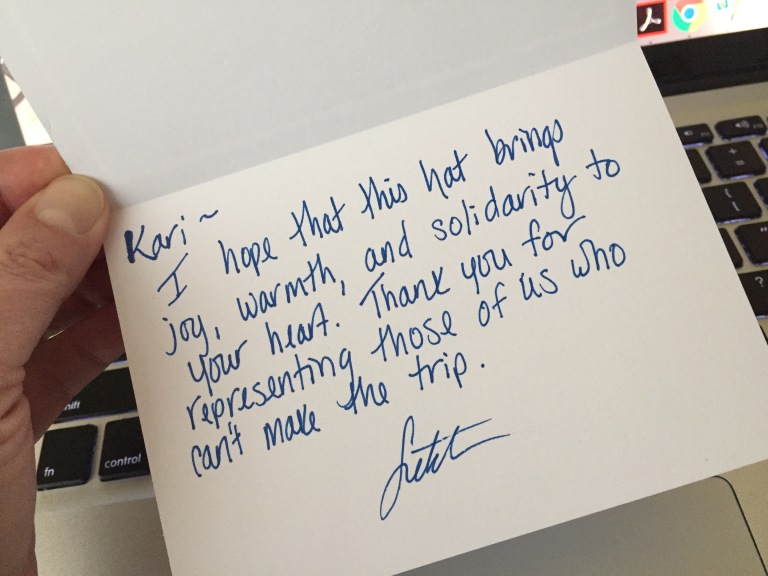 One thought on “#WhyIMarch”